I took some twilight pictures of two of the lambs, Storm and Thor. Rogue kept disappearing among the adults, so I'll have to get photos of her later. Storm is the one with the white spot on top of her head. Actually, they all have a small tuft of white, but hers is the most noticeable. 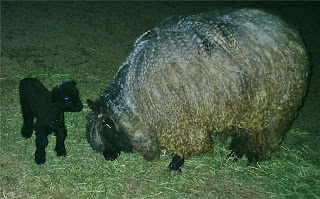 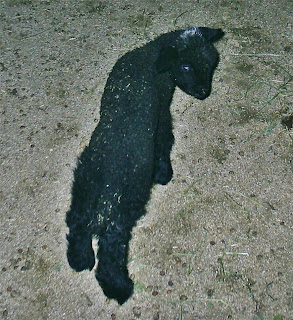 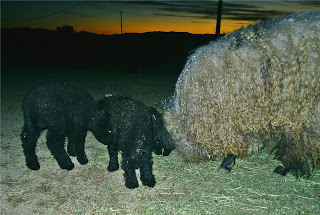 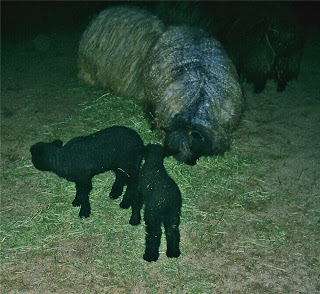 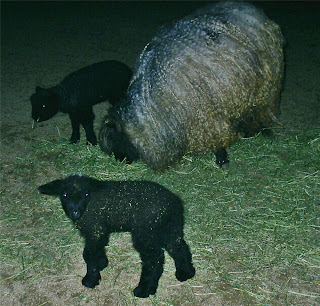 Posted by Diane at 6:55 PM No comments: Links to this post

It's nice to know my sheep are content in a variety of weather conditions. The first picture is of them lounging as snow began to fall. The second photo is them still lounging 20 minutes later while being coated with snow. (The lambs wisely stayed in the barn.) 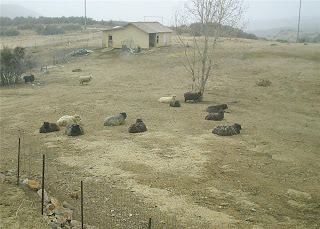 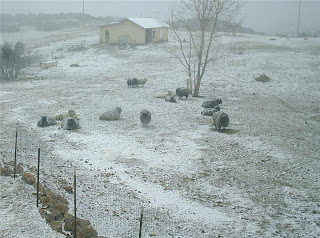 Posted by Diane at 7:26 PM No comments: Links to this post

It's a good thing I planned to let Petra and Rogue out of the lambing pen today because it was needed by a new set of residents. Boudica gave birth to a good-sized black ewe lamb this morning, who I've named Storm.

Considering how difficult it was to get Petra into the lambing pen, it was surprising how hard it was to get her to leave it. Most mothers go in easily, simply following their lambs that I carry in. But since Petra wasn't showing much interest in Rogue, she had to be forcibly ensconced.

This morning I opened the gate to let the two of them out, and they just stood there looking at me. I picked up Rogue and set her in another part of the barn. Petra didn't move. I finally gave her a shove, and she left. It took her a few minutes to find Rogue, but at least she looked for her and seemed content when she found her. New mothers -- sometimes you just have to shake your head in disbelief.

When I went out to feed the sheep this morning, I found Boudica in the barn cleaning Storm, so she was just recently born. I gave the ewe some hay and left them alone, so she could finish cleaning the baby and bonding. A couple hours later I moved them both to the lambing pen.

Years ago I read the excellent advice to carry newborn lambs only a foot or so from the ground so that their mothers can follow. The writer (I've forgotten who right now, but it was probably Ron Parker) pointed out that lambs normally don't fly, so mothers don't think to look for them at a height of four or five feet where they'd be in your arms when you're standing. Therefore, you need to carry them close to the ground where their mothers expect them to be. This position isn't bad when you don't have far to move them. However, long distances can be a bit tough on the back and legs. Heloise once gave birth to large twins a good 50 yards from the barn. Walking backwards with a lamb in each hand all the way to the barn wasn't fun.

The very short trip to the lambing pen this morning went fine, though. Boudica devotedly followed her lamb and went calmly into the lambing pen. Perhaps she had noted all the extra hay Petra has been getting in there the last couple days and was looking forward to the food.
Posted by Diane at 1:05 PM No comments: Links to this post

Rogue arrived on Wednesday -- a little black ewe lamb whose ma-a-a is a first-time mother. Many beginning mothers figure things out right away. This ewe, Petra, unfortunately did not. When Dierdre and I entered the barn and found mother and daughter, Petra fled from the dog, leaving Rogue alone. Not what a shepherd wants to see. Mothers should defend their young.

The lamb was dry and seemed to have nursed, but I wasn't sure. Petra went off to dine with the other sheep, leaving Rogue alone again. Before I went in that night, I wrestled Petra and made her let Rogue nurse. I did the same the next morning.

When I got home from work, I was quite concerned that the baby wasn't eating, at least not regularly. I found Petra socializing with the other sheep and Rogue alone in the barn. I decided I better pen them together. I made an enclosure using some chain-link gates. I coerced Petra inside and plunked Rogue in with her. I made sure she nursed again, as well.

Let me digress about the wonderful usefulness of chain-link gates. Someone gave a dozen gates to a friend of mine a few years ago, and he gave me three of them. They're 3' high x 4' long. I've used them as wool drying racks, to enclose part of the shearing enclosure, and as portable pens. Moveable, strong, and sheep-proof, they're incredibly handy to have around.

Petra has finally figured out the mothering thing. Rogue looks well-fed now. I'm going to leave them together in the stall until tomorrow, though, just to make sure Petra understands this ewe-lamb relationship is ongoing.

I don't have any pictures yet but will soon. So in the meantime I decided to include two pictures of Dierdre. It's been raining for a couple of days, and there is a lot of mud near the barn. Dierdre takes her job seriously, which means she braves all weather. Wow, is she wet and muddy.

I had to buy and unload some hay this afternoon, despite the rain. Dierdre, as always, kept me company. We were both drenched by the time I finished. We came in the house, and I changed clothes. I couldn't figure out why I still smelled like a wet barn until I looked down and saw Dierdre standing next to me. Hmmm, the source of the odor. I cleaned and dried her as well as I could. The "wet" picture is the result. The second photo is what she usually looks like. 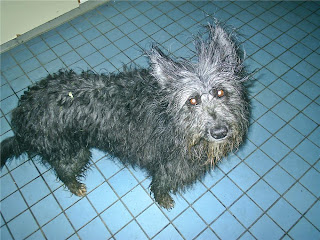 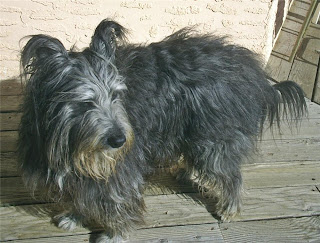 Posted by Diane at 3:33 PM No comments: Links to this post

Freyja gave birth to the first lamb of the season this morning. I've named him Thor. (Keep in mind this is ovine genealogy, not Norse mythology, so the relationships are a little off.)

The low last night was about 14 degrees, and it reached a toasty 32 degrees for a high. Thor is handling the temperature like the Norse god he's named after; it doesn't seem to be bothering him at all.

He was about six hours old when I took the pictures. 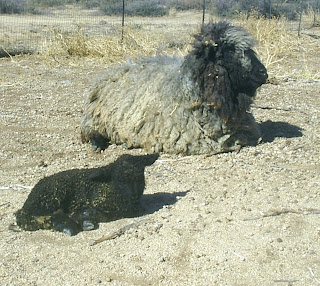 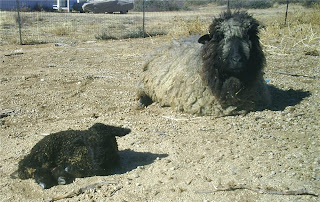 Posted by Diane at 5:04 PM No comments: Links to this post

I knitted the Loch Ness monster for my goddaughter Violet. Her mother and I have taken several pictures of Nessie, but neither of us has been able to snap a good one. I was frustrated until I realized why.

Nessie is the Loch Ness monster; no one ever gets a clear photo of her! What was I thinking? The lack of photographic clarity must prove Violet's Nessie is a good representation of the original! 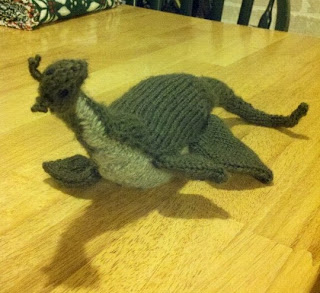 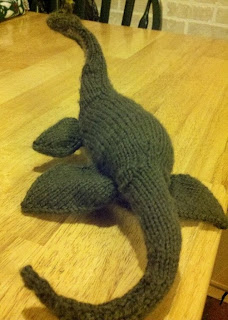 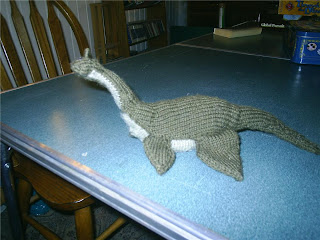 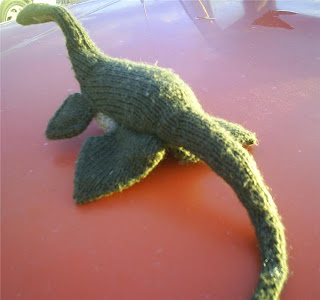 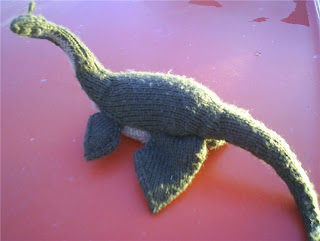 Posted by Diane at 6:10 PM No comments: Links to this post