Scout is pretty smart. (Whenever I make statements like this, assume they are followed by "for a sheep.") Just like his mother, Clare, he's inventive, a good problem solver, and one of the first to get into trouble. In fact, clever and trouble-prone are probably synonymous when referring to sheep.

So when I fed him yesterday, it wasn't too surprising to turn around and see he had a wire tomato cage stuck on his head. It didn't appear to bother him much, though. I had to insist he stop eating in order to pull it off him, and as soon as I freed him, he went right back to the hay. 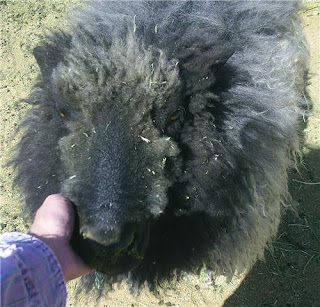 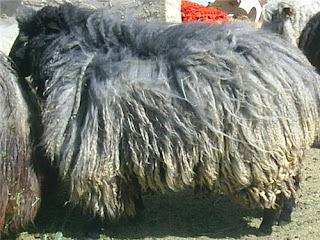 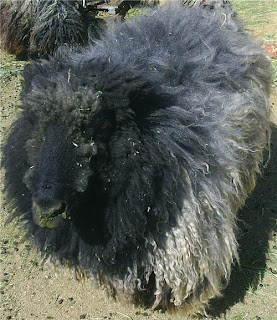 What do you call a sheep who gets his head stuck in a tomato cage?

When Mark and I got home the other day, we saw sheep scattered about the upper section of the property. It was close to 7:00 p.m., well past their dinner time, and they had gone foraging.

I was driving, so Mark got out and opened the gate. As I pulled the car through, several sheep baa-ed and approached the car. By the time Mark had latched the gate, the sheep had blocked the driveway. He yelled at them to move. He shooed them. He waved his arms and yelled some more. They stared at him and then looked back at me and baa-ed. Apparently they weren't going to let me out of their sights until I fed them. Of course, that wasn't going to happen anytime soon, if they didn't get out of the way.

I called to Mark and suggested he let Dierdre out of the house. She'd move them! So he unlocked the front door and called her. She ambled out a few steps, looked at him, looked at the sheep, and started back into the house. Gesticulating, he urged her to go herd the sheep. She stared at him and didn't move.

I stuck my head out the car window and called Dierdre. Her response was immediate: she raced down the two porch steps and into the middle of the flock. In less than a minute, the driveway was clear, the sheep were running toward the barn, and Dierdre was looking at me proudly, a job well done.

Poor Mark. The sheep ignored him, and the dog wouldn't obey him. Dierdre likes him, but she's definitely chosen me as her person. I had thought the sheep came first in her eyes, though, but it turns out I hold that lofty position.

Last summer Mark fed the sheep a couple days when I wasn't feeling well. Dierdre always goes with me to feed them, so Mark tried taking her along. She went out onto the deck, laid down, and watched him walk to the barn. She calmly surveyed him while he got mobbed by hungry sheep, showing not the slightest interest in helping. He learned how valuable her assistance is, since I don't get swamped by sheep anymore. Twenty or so large, strong sheep who are intent on grabbing the hay from your hands can easily knock you over, and they don't care if they step on you once you're down (believe me, I know).

Although she really likes her sheep, apparently it's the team of Dierdre and Diane that truly makes her happy. I feel honored.
Posted by Diane at 8:28 PM 1 comment: Links to this post

I've been so busy lately that I've neglected my blog. However, the sheep have been busy, too, providing all sorts of fodder for writing.

A few weeks ago I woke up in the middle of the night hearing a lamb baa. It sounded like she wanted her mother. I tried to go back to sleep, hoping the situation would sort itself out, but the baa-ing persisted. After about 20 minutes I surrendered, got up, put on shoes and a jacket, grabbed a flashlight, and went outside. Dierdre accompanied me, of course.

The night was bright--the moon almost full. Dierdre and I walked toward the barn, where the crying lamb had retreated. Just as we neared it, the lamb and several adults appeared from the far side of the building and approached us. The lamb stopped baa-ing, so I figured her mother was part of the group. We turned around, returned to the house, and went back to bed.

In the morning, we went out to feed the sheep as usual. (You notice how I speak in the plural; it's pretty much a given that Dierdre accompanies me where ever I go!) I heard that same lamb crying again. Hmmm, this wasn't good. And, sure enough, I quickly discovered why: there were half a dozen sheep trapped in the hay storage room, the lamb's mother, Frejya, among them.

Now this was bad for several reasons. One, the incarcerated sheep had eaten part of my stored hay, which meant I was going to have to buy hay sooner than I expected--definitely an unwanted expense. Two, the almost half-full bag of COB (corn, oats, barley, and molasses) was stored in there, and it had disappeared. That meant they had eaten close to 20 lbs of COB--definitely not good. Three, they were hot and thirsty from being stuck in a small room with only a single window to allow their hot and humid breath to escape. And four, they had removed storage container lids, torn open two trash bags full of empty feed bags, and pulled loose from the bales a fair amount of hay, and all this debris had collected in front of the door.

Between the mess and the crowd of sheep, I couldn't get the door open! Not even an inch.

I grabbed a shovel, put it through the open window, and tried to push some of the junk out of the way, but it didn't work; I couldn't get enough leverage to budge the compacted hay. I thought about climbing through the window, but I was going to have to stand on a chair or something to reach it, and the area in front of the door slopes steeply. I figured that was too risky.

What to do....And meanwhile the sheep inside the hay room were baa-ing to be let out. The rest of the sheep were loudly complaining because I wasn't feeding them, and Dierdre was jumping and barking, upset because she couldn't get into the hay room to reach the sheep she knew were in there. Oh, and I was supposed to be leaving to drive to Phoenix within the next half hour. My stress level was definitely rising.

Then I suddenly thought of a neighbor boy who sometimes feeds my sheep for me. At 13 years old, he could probably get through the window without needing a step up. It was kind of early in the morning, but I called him anyway. His mother said he'd be right over. He and his older brother showed up about 15 minutes later. One climbed through the window, while the other handed him the shovel I'd been trying to use. He shifted the debris in a few minutes and got the door open just wide enough to admit (or exit) a sheep.

Now, being sheep, they of course wouldn't move. They'd been whining about being stuck in there, and now they wouldn't budge, despite some forceful pushing from the neighbor. Dierdre to the rescue! She charged in and very quickly convinced one of the rams that the dog-free outside was much preferable to the Dierdre-dominated inside, and he bolted out the door. Being flock animals, the others followed at once. Hmmm, five of the six culprits were rams....

After that, every time I fed the sheep I checked and double-checked the door was secure.

A few days later my feed guy delivered more hay. As he reached the barn on his small tractor, pulling a trailer piled with hay bales, I caught up with him. We looked in the hay room, and what did we find? Yep, a room full of rams, with the door wedged shut again and the same scenario: loud unhappy sheep in the hay room, rowdy, hungry sheep outside, and a frantic dog wanting to reach the miscreants.

This time I had an idea, though. My feed guy pushed a hay bale off his trailer and placed it in front of the door. Using this large and stable "step stool", I climbed through the window, shoveled away the additional refuse the sheep had found, and pulled open the door. Dierdre repeated her how-to-remove-sheep-from-a-small-space maneuver and cleared the room. We unloaded and stacked hay, while the escapees hurried to a water trough; it's thirsty work eating illicit hay.

Since then I've devised a new way to fasten the door, and so far no one has broken in, although I've seen evidence that they've tried. Such silly sheep!
Posted by Diane at 6:30 PM 2 comments: Links to this post